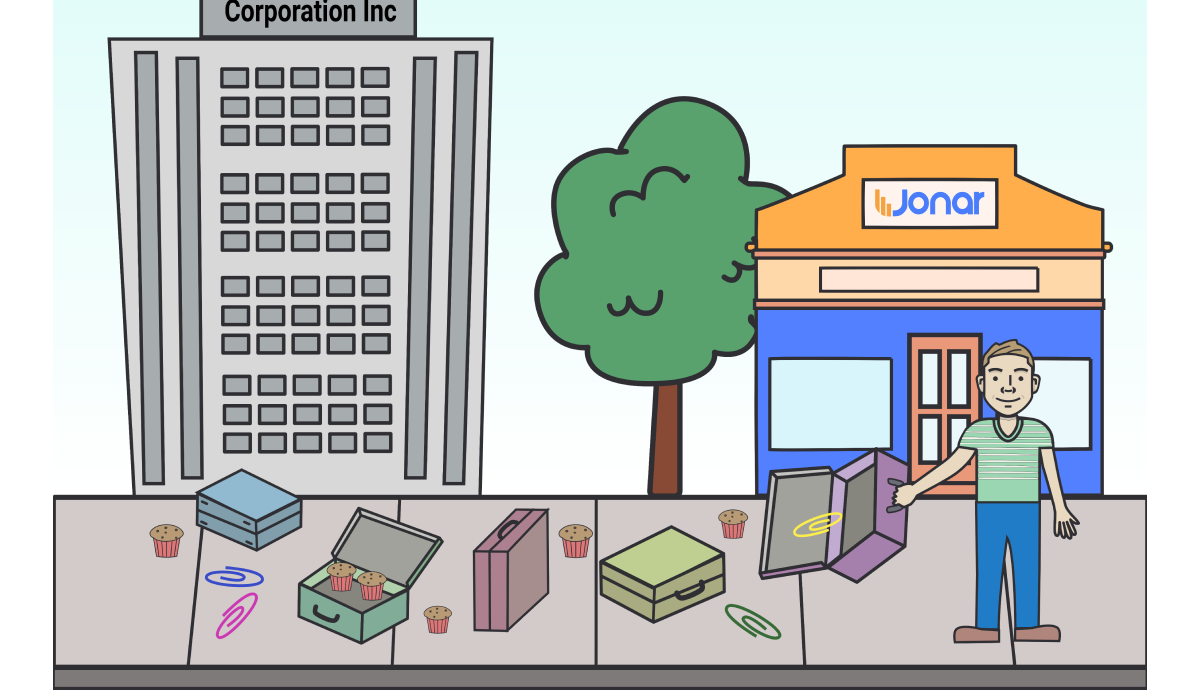 My journey of unlearning: Making the transition from a big company to a small one

I have worked for large companies my entire career. For more than a decade, I had access to amazing health benefits, IT teams who magically showed up and fixed my computer problems, and loads of perks like unlimited paper clips and muffins at meetings. But for some crazy reason, I gave it all up.

I have worked for large companies my entire career. For more than a decade, I had access to amazing health benefits, IT teams who magically showed up and fixed my computer problems, and loads of perks like unlimited paper clips and muffins at meetings. But for some crazy reason, I gave it all up.

Why did I do it? I wanted to have a real voice at the table. I wanted to feel part of the decision-making process and learn to be a leader. I wanted to grow and change. But I was not prepared for how hard it is to really change. Making the move meant that I had to break away from the bad habits and bureaucratic inclinations that can be characteristic of large companies.

And so, I embarked on a journey of unlearning and while freeing, it wasn’t easy.

Real feedback comes once a year, during your annual review

Employees in big companies are accustomed to scheduled reviews, possibly with forms to fill in and rules to follow. For those of us that thrive in this type of structured approach, there’s comfort in knowing that you have clear expectations to deliver against.

But, for even the best employees in the world, these reviews can be incredibly stressful, especially when promotions and salary increases are tied directly to the results. There is almost a built-in requirement for negativity and criticism, which means that feedback during this formal process can sometimes feel like it is coming out of left field.

In small companies, feedback is much more free-flowing. Here at Jonar, we don’t have a formal review process. Instead, managers meet one-on-one with their team members regularly to check in. These casual conversations allow team members to speak honestly about the projects they’re working on. While I do miss some of the trappings of the more structured approach to reviews, these more relaxed interactions encourage everyone to frequently consider their personal goals and be candid about their overall satisfaction with their jobs.

CYA as a guiding principle

This was a particularly tough habit for me to break. Covering one’s ass is a survival mechanism at most large companies. Collecting evidence of your co-workers’ ineptitude and creating a constant paper trail documenting your own superiority is political currency.

There’s no room for CYA in a small company. The instinct to defend your own territory and protect your career path is toxic in an environment where every individual is personally invested in the company’s success.

This principle is so ingrained here at Jonar that in my first month of work, one of the members of my team had the courage to point out to me that I was criticizing a colleague in an effort to make myself look better. It was like a punch to the gut when I realized what I had done but a very important lesson to learn. Personal success is tied directly to our ability to work well as a team.

Responsibility without influence is a standard operating practice

In large companies, the strategic vision is set by a handful of senior people. Then it becomes the responsibility of the worker bees to execute that vision. But, when you don’t have a say in the plan, it is very difficult to have a vested interest in its success. Being overburdened with responsibility without feeling like your opinions and experience have value can be incredibly de-motivating.

In a small company, everyone has a voice. From the interns to the president of the company, everyone plays a role in setting the direction and figuring out the best way to get there. Yes, there is such a thing as a bad idea, but all ideas are welcome and considered. After a decade of blindly following the plan, it was a welcome shock to my system to realize that if something wasn’t working, we could just try something new. We don’t waste energy on projects that aren’t effective just because someone in the corner office thought it was a good idea.

Corporate culture as an afterthought

For many large companies, vision and values are just words on a wall or in an annual report. Employee handbooks are filled with jargon about respect, integrity, and teamwork. But the traditional hierarchal structures tend to breed disharmony. Do only senior managers get offices? Are people recognized for time served instead of value-added? Are employees encouraged to socialize but only outside of the office and outside of office hours?

At a small company, the vision and values are truly words to live by. They are meant to pervade every aspect of our daily work and guide the decisions we make. Treating everyone as valued members of the team isn’t just lip service.

From the lack of traditional departmental silos to the ways we encourage co-workers to actually be friends, the casual and friendly atmosphere was a bit shocking for me at first. It was hard to trust because it blurs the lines between work and life in perplexing ways. But, when you dig deeper, it becomes apparent that strong workplace culture is a result of a motivated and engaged group of people who truly care about what they do and want to be successful together.

So, is the grass greener?

Only time will tell if making the move from a big company to a small one will help me achieve my personal goals. I can say that the transition has been at times uncomfortable, embarrassing, and even a bit painful.

But in this journey of unlearning, one thing is clear - I sure have learned a lot.